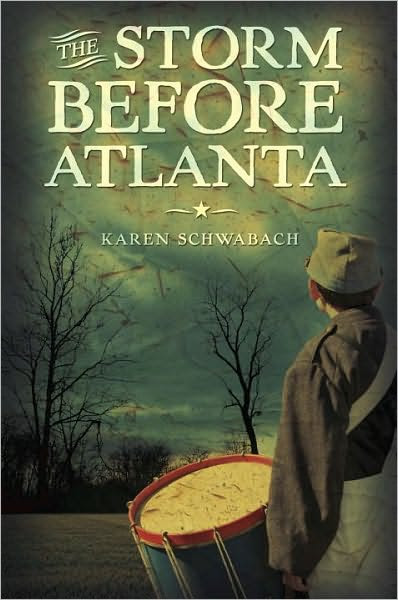 My thanks to Karen Schwabach for stopping by Tribute Books Mama and sharing her thoughts about her book, The Storm Before Atlanta.

ABOUT KAREN: Karen Schwabach grew up in upstate New York and lived for many years in Alaska, where she taught English as a Second Language in the Yup'ik Inuit village of Chefornak. She now lives in New York where she writes full-time.

1. How did you come up with the title?

My first two novels, The Hope Chest and A Pickpocket’s Tale, had titles that turned out to have already been used by other authors. I was determined not to let that happen this time. The “storm” is a metaphor for the Battle of New Hope Church, which tore apart the 107th New York, the regiment in my story. It in fact ended with a fierce thunderstorm.

2. Is there a message in your novel that you want readers to grasp?

3. How much of the book is realistic?

All of it! I do tons of research, and the more unlikely something in one of my books sounds, the greater the chances that it’s absolutely true. The most far-fetched stuff in Storm Before Atlanta—children in the line of fire, an untrained kid being asked to administer anesthesia, and enemy soldiers hanging out with each other between battles—is all documented.

4. If you had to do it all over again, would you change anything in your book?

No… the editing process at Random House Children’s Books is very thorough, and I had lots of opportunity to make changes as we went along—and did make them. Now it’s pretty much as I wanted it.

5. What was the hardest part of writing your book?

The battle scenes, because I’ve never been in combat. But I think they came out all right.

6. Did you learn anything from writing your book and what was it?

I learned a lot of fascinating stuff about the Civil War, a lot of which I couldn’t use. For example, I read the autobiography of Susie King Taylor, an African-American woman from Savannah who, at age 14, was hired to teach the soldiers of the first black regiment to read. I was sad there was no way to work her into my story… but she was in a different part of Georgia from my characters and the Confederate Army was in the way.

In fact, I couldn’t use anything about the Union’s 180,000 African-American soldiers because they were actually banned by William Tecumseh Sherman from participating in the Atlanta Campaign, the march my characters are on.

7. Do you recall how your interest in writing originated?

Both my parents are writers. I sort of cut my teeth on The Writer’s Market. And then my 5th and 6th grade English teacher, Mr. Coster, used to call me and this other kid in from recess and tell us both that we were going to be writers. He’d go on and on about it, and we’d both stand there staring at the edge of his desk and shifting about uncomfortably. But I took his word for it.

8. Who is your favorite author and what is it that really strikes you about their work?

9. Tell us your latest news.

10. Do you have anything specific that you want to say to your readers?

Read the history that interests you. If what you know about history is what was in your school textbooks, then you’re left with the impression that it mainly involved Great Men, and that everything happened when it was supposed to happen. (Like in 1860, everyone was saying, “Hey, look, it’s almost time for the Civil War.”) And you end up thinking that the world nowadays is going crazy.

Once you start reading real history, you’ll see the world has always been crazy. And events happened haphazardly, and they could very well have turned out differently.

ABOUT THE STORM BEFORE ATLANTA: At a time when most people have grown weary of the war between the states, two young children are desperate to find their way to the battlefields. Jeremy DeGroot wants nothing more than to join a troop as a drummer boy. For Dulcie, a runaway slave, freedom means she must head directly toward the fighting in the hopes that she'll become "contraband," that is, property of the Union troops. Both Jeremy and Dulcie find a place with the 107th New York Volunteer Regiment and even start to forge a friendship. But all that is threatened when they keep crossing paths with the mysterious Charlie, a young Confederate soldier, who may look like the enemy but feels more like a friend. Young readers who like their fiction filled with exciting historical details, rich characters, and action-packed adventures will be drawn to The Storm Before Atlanta.

For more information on Karen and The Storm Before Atlanta, please visit RandomHouse.com

Congratulations to our winner: Sharla Long!
Posted by Tribute Books at 12:01 AM