Here is my teaser from Swift as Desire by Laura Esquivel (Pages 14-15): 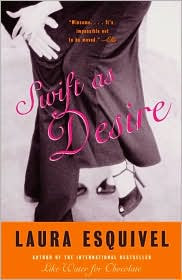 The relationship between dona Jesusa and dona Itzel was far from good until after Jubilo was born. Because of race. Dona Itzel was one hundred percent Mayan Indian and she disapproved of the mixing of her race's blood with dona Jesusa's Spanish blood. For many years, she had avoided visiting her son's home. Her grandchildren grew up without her being very involved in their lives. Her rejection of her daughter-in-law was so great that for years she refused to speak to her, arguing that she couldn't speak Spanish. So dona Jesusa was forced to learn Mayan in order to be able to speak with her mother-in-law. But she found it very difficult to learn a new language while raising twelve children, so communication between the two was sparse and of poor quality.

Posted by Tribute Books at 9:22 AM