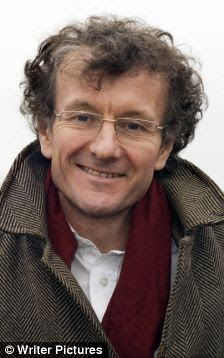 My thanks to Christopher Nicholson for stopping by Tribute Books Mama and sharing his thoughts about his book, The Elephant Keeper.

ABOUT CHRISTOPHER: A prizewinning radio documentary producer who has worked for the BBC World Service, Christopher Nicholson rode an elephant for the first time at Chitwan National Park in Nepal. He has been interested in natural history his entire life, and many of the programs he produced for the BBC revolved around the connection between animals and humans. Because of a love for the novels of Thomas Hardy, Nicholson and his wife settled in Dorset, England, with their two children.

The title came easily. Sometimes it's hard to find the right title, but here I knew at once that it should be called The Elephant Keeper. In that title, the word 'keeper' is at least as important as 'elephant'. For me, this isn't a novel about two elephants in 18th century England, but about the life of a man who looks after two elephants in 18th century England. It's a significant distinction. The Elephant Keeper, I'd say, is not conventionally an animal novel at all, but a novel about our complicated relationship with animals. We are animals ourselves; and if the book has a message, I suppose, it may be that we should think more deeply about our animal nature and about what that might mean in our dealings with other animal species. Not that I'm very keen on novels where the messages are too blatant.

It's not a true story, in a historical sense - very few of the details of the story are based on historical fact - and yet it's the kind of story that might be true and that I wrote as if it were true. Much of the novel plays with ideas of truth and possibility in relation to fiction. The ending is the part of the novel that has aroused the most controversy. I needed an ending that avoided what might seem a sentimental conclusion, and yet I suspected that, in a strange way, many readers would want the sentimental conclusion. So that was a tricky little problem to work out; but, in general, writing the novel was a joy. Elephants are wonderful subjects to write and think about - they are such engaging and fascinating creatures, with contradictory qualities in equal measure: they're very big and strong and potentially violent, but they are also gentle and sensitive and inclined to be peaceful. I like to think of an elephant as a light creature in a heavy body, which is also how I like to think about novels.

I tend to love particular novels more than particular novelists. Among contemporary writers, I greatly admire the work of J.M. Coetzee, whose 1980 novel Waiting For The Barbarians seems to me one of the most perfect pieces of fiction I've ever read, with not a word out of place. A writer who once haunted me is the mid 20th century English modernist novelist Henry Green - his 1945 novel Loving is a very beautiful affair. For some years, when I started out writing fiction, I found myself trying to write like Henry Green, and failing, of course.

I'm writing another novel now but I don't know how it'll work out. It's an experiment and it might go wrong, so I won't say too much now. Although it's not about elephants or elephant keeping, an animal has somehow worked its way into the story. I'm waiting to find out what's going to happen.

ABOUT THE ELEPHANT KEEPER: England, 1766: After a long voyage from the East Indies, a ship docks in Bristol, England, and rumor quickly spreads about its unusual cargo. In the final two crates is a pair of young elephants, in poor health but alive. Seeing a unique opportunity, a wealthy sugar merchant purchases the elephants for his country estate and turns their care over to a young stable boy, Tom Page. It takes time for Tom and the elephants to understand each other, but to the surprise of everyone on the estate, a remarkable bond is formed. The Elephant Keeper is a captivating tale of love and loyalty between one man and the two exotic animals that change the lives of everyone who encounters them.

For more information on Christopher and The Elephant Keeper, please visit the book's Harper Collins page.

Congratulations to our winner: Ellie!
Posted by Tribute Books at 12:01 AM