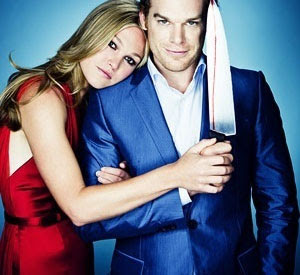 Season five begins with Dexter in shock over a major character's death. He feels guilty that he caused it because of his relationship with the Trinity Killer (John Lithgow's Emmy-winning performance from season four).

Quinn is on the trail of Kyle Butler, Dexter's alias. Quinn notes the similarities between Kyle and Dexter from sketches. Liddy (Peter Weller of RoboCop fame), a sleazy member of the department is hired by Quinn to investigate Dexter. Liddy gets too close, by bugging Dexter's apartment and taking pictures of him dumping bags in the ocean.

Dexter kills Boyd Fowler, a sanitation worker, who is responsible for the deaths of many women, but it is witnessed by Lumen (Julia Stiles), who was to be the next victim of Fowler. Dexter hears her story and they eventually team up in the murders of her torturers. One by one they begin to hunt them down.

Posted by Tribute Books Mama at 11:59 AM