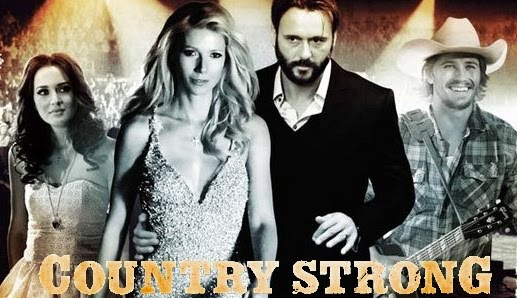 The surprise of Country Strong is that it plays as if the script was changed when Gwyneth Paltrow was cast. Throughout the film, it feels like her country music superstar character, Kelly Canter, was meant to be a supporting role. But when Gwyneth signed on, the emphasis shifted to the just out of rehab comeback story.

I've always been a fan of Gwyneth Paltrow, and she does a great job here with her vocal ability. I always liked "Cruisin'" - her duet with Huey Lewis from the movie Duets. She does a spectacular job with Country Strong's climactic final concert scene. You believe she could be Faith Hill or Carrie Underwood. (On a side note, every country concert I've ever been to I've enjoyed - Dixie Chicks, Martina McBride, Keith Urban. Great voices. Great performers.)

But the center of the movie is up and coming singer, Beau Hutton played by Garrett Hedlund. For an actor playing the role of a cowboy with a guitar, he steals the movie.

Gossip Girl's Leighton Meester does justice to her role as Gwyneth's younger beauty queen competition in music and for Beau. It's jarring to see Tim McGraw play such an unlikable guy as Gwyneth's manipulative husband.

Overall, the plot line is confusing and doesn't make sense in terms of the motivations of the characters. However, the music and the stellar performances of the cast make up for the head scratching moments.