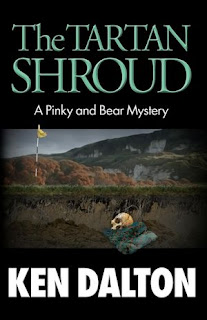 A bulldozer unearths a young girl’s body on a golf course in Scotland but for some reason, Fergus Murray, the top crime officer in Tayside seems unwilling to pursue the case. Fergus contacts Willow Stone, his American cousin and pleads for help. Willow, Pinky’s favorite ex-wife, calls in all her chips and convinces Pinky, Bear, Flo, and Ettamae to go to the small Scottish town of Pitlochry to help her cousin find the killer. Along the way the American’s come across a forester with a wonky eye—haggis—the occasional bad weather spring day—various Scottish policeman all named McSomething—mutton pie—a near new, sixty-year-old Austin Taxi—a bathroom that could double for a freezer—the nearly indecipherable Scottish accent—many glasses of whiskey and beer—ancient records—a broadsword—and a real Duke! Ride with Bear, Flo, and Henry during their final mad dash across Scotland to try to stop the murderer before he kills again inside the hallowed halls of Blair Castle.

This mystery takes Pinky, Bear, Flo, and Willow to Scotland at the request of Willow's cousin, Fergus. The top crime officer of Tayside, Scotland is unwilling to pursue the case of a young girl whose body was found on a golf course after being dug up by a bulldozer.

As they explore the different aspects of Scottish life and the ways of the people along the way, it really reels you into the story. There are many laughs throughout the journey as the characters' antics make this a fun read.

In the end, they uncover all of the details surrounding the crime and they are able to solve it. I found The Tartan Shroud to be an intriguing, fun story that's completely enjoyable. It's a real page turner.

The Tartan Shroud can be purchased at:
Kindle, Amazon, Barnes and Noble, Alibris, kendalton.com 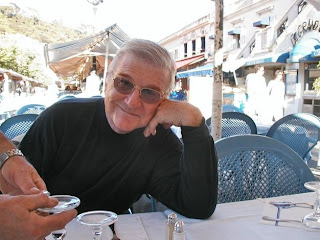 Ken Dalton was born in 1938 at Hollywood Hospital. He grew up with his parents, his older sister, Pat, and younger brother, Richard in Los Angeles. The year 1938 informs the quick reader that Ken’s older than a lot of people, but younger than some.

In a turn of bad luck, the dreaded Polio virus found Ken.

At the end of World War ll, Ken’s family moved to Cheyenne, Wyoming for a year where he learned how to live through snow blizzards, avoid walking through the large pile of coal in the basement, and how to survive life as an Army Officer’s brat on a base called Fort Warren.

By the age of sixteen, after eleven years of operations, therapy, and braces, Ken’s luck changed dramatically when he met the girl of his dreams at a party. A few years later they married, produced three wonderful children, and settled into a happy life in Southern California.

In 1966, Ken, who worked as a technician for Pacific Bell, and his family left Southern California for the green hills of Sonoma County where they bought a home in Sebastopol surrounded with apple trees. A few years later, Ken and Arlene built a new home on three and a half acres. They raised cows, pigs, and learned how to build outstanding fences. While their children grew, they hosted two exchange students, Eva Reimers from Sweden, and Tanja Wuttke from Germany, both of whom are still loved members of the Dalton clan. Also during those years, Ken was promoted to management at Pacific Bell. He eventually ended up responsible for all the central offices, sixty-three, in an area that covered five counties.

In 1977, Ken, Arlene, Bob Wiltermood, and his wife Norma, designed, built, and operated a 2000 case winery named Pommeraie Vineyards. They produced award winning Cabernet Sauvignon and Chardonnay. However, after Bob died, the winery was sold. Ken and Arlene moved to a hilltop in Healdsburg.

With the winery gone, and time on their hands, Ken and Arlene started to perform with the Camp Rose Players. Twenty years and forty productions later, both are still acting and singing.

Life was good. All Ken had to do was learn some lines and bow when the audience applauded.

Then, ten years ago, Ken started to write. His first article was published in Golf Illustrated in August 1996. More golf articles followed in national and regional magazines including Golf Magazine and Fairways and Greens.

After a two-year stint on the County Grand Jury, Ken felt the need to begin his first novel.

Now, after a decade of struggle to learn the craft of writing, Ken has become the publishing world’s latest overnight sensation.