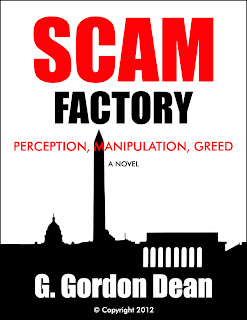 Congratulations to our winner!
bn100candg [at] hotmail [dot] com

Whoever said 'white-collar crime doesn’t pay' never lived in Washington D.C. TierGroup is a business consultancy firm located in the heart of DC. Its Division Heads have a very cold and calculating unorthodox approach to conducting business. Protecting and serving their clients is the only thing that matters. Nevertheless, loyalty can swing both ways in this journey through greed, corruption, and absolute lack of accountability.

As a former Las Vegas Casino Surveillance Director, Michael Crayter, a straight shooter, becomes an unaware, almost, employee of TierGroup in mid-2001. His transformation takes many shapes from idea man to fraud guru. He embarks on a journey to Iraq, through Hurricane Katrina and eventually takes part in one of the biggest scams in the history of the United States - the TARP funding program. His boss, Charles “The Czar” Zarin, is the ultimate manipulation mentor. Michael Crayter’s experience will last for more than eight years and will make his old Vegas job seem like child’s play.

The investment opportunities the United States has to offer during this timeframe are seemingly endless and the public joins in on the greed. The whole country is riding high on the inflated value train with careless abandonment. There are no regulations followed or laws unbroken by the Mortgage Lenders, Stock Brokers, and Bankers. The bubble is getting bigger and the clock is ticking. It's every man for himself. Divide and conquer. Borrow and spend. No one sees the tsunami coming, except for Charles Zarin. Capitalism will be turned upside down and the money spigot will run dry.

By late 2007 the bubble bursts and our country’s economy is left in ruins. The Treasury is sent in to bail out the white-collar thieves. While losing most of its clients TierGroup and Michael Crayter are left to fend for themselves. The tables are turned on the fat-cat bankers who caused the meltdown. Michael Crayter uses his hard gained experience to get even with the fake bastards. Almost everyone loyal to TierGroup gets away with highway robbery and the American taxpayer is left holding the bag. Michael Crayter begins to tell his story, in this Four Part first-person narrative, during a 2005 interview at FBI headquarters in Washington D.C.

SCAM FACTORY started out as a dream I had about a job interview with a high-end consulting firm. I initially thought that my dream would make a great movie, but I decided to write a book instead. As I began to develop the plot and storylines I realized I could tie it all in with, past and current, real life events in the U.S. from 2001-2009. It was also relatively easy to combine some of my business experience, and people I have run across over the years, into this story. I grew up in Las Vegas and lived there for about thirty-five years so knowing about Scams, or coming up with my own for this book, wasn’t so hard. The TRUE events that led to the U.S. financial crash, mass business failures, and declines in property values in late 2007 were nothing but ammunition for this novel.

SCAM FACTORY is not a story about the guy in the white cowboy hat saving the town and riding off into the sunset. It is fiction based on reality with a ‘true to life’ outcome. The characters in this story get away with White-Collar crimes just as the real life participants did. The characters are sadistic and have a knack of getting away with almost everything, just like the in real world. It is as simple as that. One of the messages I wanted to convey in writing this story was to show what kinds of professionals were out there exploiting our businesses and citizens without legal retribution. The characters are mostly cold, calculating, and narcissistic.

Scam Factory can be purchased at:
Kindle, Nook

G. Gordon Dean is a Real Estate agent and Business Consultant currently living in Arizona. He has been a media buff for over two decades. As a media buff he has kept himself well aware of past and current events in business, government, and politics. He lived in Las Vegas, Nevada for over 30 years. This is his first novel.

Leave a comment with your email address to enter to win an ebook of Scam Factory.
Ends January 31, 2013.