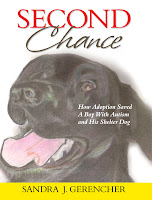 Chance, “the Shelter Dog,” is the narrator in a very interesting short novel about adoption.

In Second Chance: How Adoption Saved a Boy with Autism & His Shelter Dog by Sandra J. Gerencher we get inside Chance’s head as he relates the story of how a seemingly ordinary day in his animal shelter pen turns into a new life for him as a woman and her Autistic young son Ryan wander in, see him, and take him home.

Along the way we see the world as Chance (a Rottweiler/German Shepherd mix) sees it, and we learn with him that Ryan is adopted, as is the rest of the “pack” in Ryan’s home (a trio of Pomeranians). It is from this pack that Chance is told that he should ask Ryan about the mysterious word “adoption” that he keeps hearing.

Although we know that Ryan is Autistic, an equally mysterious word to Chance, we learn from Ryan’ and Chances’ conversation how that makes him “different” from others.

We discover that being “different” is not a bad thing, for in our differences we have unique gifts to offer each other. Ryan’s unique gift is that because of his Autism, he can talk to his dogs, and they can talk to him. Apparently persons with Autism sense the world in ways that others do not. Whether this actually lends them unique communication skills might be considered artistic license on the part of Gerencher, but as this novel is based on her real life, it may instead be an unorthodox manner in which to reveal a theory. Ryan is real, as is Chance and the three Pomeranians. Gerencher is entitled to her thoughts on Autism, her real-world observations from living with her son gives her credibility.

Gerencher adopted Ryan (not the son’s real name) and all four dogs. One thing that becomes clear from the book is the loving self-sacrifice that adoptive parent’s must make. Adoptive parents must “make room” in their lives. One does not “have to” adopt. There is no compelling reason to do that except the motivation of love.

How does this book review connect to the reason Sober Catholic is online?

We must open our eyes to the many ways of “recovery”, it isn’t just becoming free of an addiction, it is about starting anew. As Chance got a new life when Ryan’s Mom adopted him from the shelter, so do we addicts get new lives when we leave the past behind. Also, the sacrificial nature of adoption (or any other radical work of service) expands and develops our own sense of who we are, and what we can be.

Posted by Tribute Books at 9:51 AM