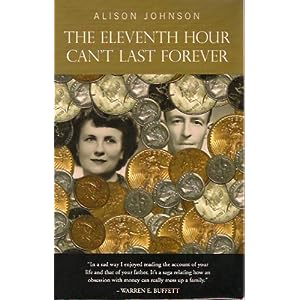 If you are into watching and listening to some of the horrific family sagas presented on such television shows as Dr. Phil or Oprah, then Alison Johnson's The Eleventh Hour Can't Last Forever will appeal to you.

What we have here is a detailed family memoir where the author unlocks the dreaded skeletons in her family closet. There is an eccentric father, who was a miser and hoarder of gold, silver, books, as well as other items. Johnson's mother was mentally ill, who prior to her illness, enjoyed life but had been stunted by an unhappy marriage. In fact, as the author states, the uneasiness of her parents' relationship and her father's unusual character traits contributed to producing three children who were not happy or well adjusted. There were also two brothers, one who was an alcoholic and the other estranged from his family, and a sister, who mismanaged her father's assets, even turning to the stars for answers to the frustrations of her life. The author appears to be the only sane one of the family, who for the most part seemed to have a happy life.

The Eleventh Hour Can't Last Forever reads more like a work of fiction, however, as mentioned in the introduction, the story is true, nothing has been added or embellished, except some names have been changed of a few people not central to the main action and the first names of the author's daughters to afford them a degree of privacy. Johnson informs us that she wrote the family memoir in 1984-85 but delayed its publication until both her brothers died.

The saga unfolds in Palisade, Nebraska, a tiny enclave, in the middle of nowhere, halfway between Denver and Lincoln, where Johnson was born and, and as she informs us, had a population of 799. Her father was a successful businessman, however, he was obsessed with gathering silver and gold coins and hiding them in kitchen cupboards, attics, bottom of dresser drawers, and in holes in the ground. He was convinced that the total collapse of the American economy and government was just around the corner. Perhaps, if this happened within the past few years with the meltdown of the financial institutions, we might have taken a different view of his eccentricity and economic theories. Nonetheless, it was due to this obsession that had an enormous influence on his family leading to unfortunate repercussions and a family shipwreck, where nothing was resolved happily.

Many will no doubt question why anyone would want to air their family's dirty linen in public? To this, Johnson replies that she had suffered emotional violence at the hands of her siblings, as she was a kind of punching bag for too long and it was time she punched back, particularly that it went as far as her family believing that she was mentally ill. Perhaps, the writing of this book was in fact a cathartic exercise to finally release and cleanse herself of all of the garbage that was in her- a kind of therapeutic experience?

All-in-all, Johnson has written a well-written memoir of a dysfunctional family and the complex workings of human relationships-far more complex than first impressions would suggest. Moreover, she displays a impressive analytic intelligence that makes this work provocative, although nonetheless, quite disturbing.

- Bookpleasures.com
Posted by Tribute Books Mama at 9:38 AM